Mr. Manoucheri formed Global Integrity Realty Corporation in 2000. Within the first year, the company’s assets under management grew from three times, from 400 to 1,200 units. With his decades of real estate experience, Mr. Manoucheri persuaded Trisail, a subsidiary of Bank of America to join forces with him in acquiring multi-family projects. One such acquisition, purchased by the joint venture at $50,700,000, sold a few years later at $78,000,000, generating a substantial profit for the bank and over $9,500,000 for Global’s investors.

Over the next ten years, Global acquired well located apartment projects in Los Angeles, Santa Barbara, San Bernardino, Ventura and San Diego Counties. Partnering with Trisail and other pension investors, the company acquired ten more properties ranging in size from 200 to 450 units, with purchase prices from $20 million to $70 million. Eventually, assets under management grew to over 4,000 units. By renovating and improving its existing properties, Global has produced returns to investors greater than the rate of inflation. Mr. Manoucheri’s dedication to the business, his hands-on approach, his top down management style, and his emphasis to staff to continually reach better operating results, has enabled the company to deliver operating results yielding over 20% annually on average, and over 60% annually on average for assets sold.
Speaking At
A Special Panel Session - "A Look Ahead: What to Expect for 2025" 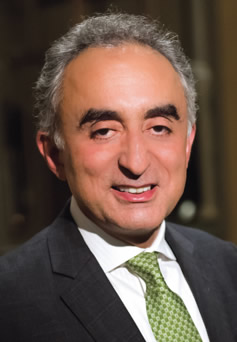